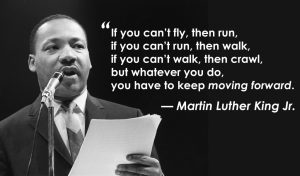 He was very important for our community. He became one of the most important leaders of the black civil rights movement in the United States and in the world , with a campain of non-violence and love for our neighbor.

On October 14 of 1964 Martin Luther King received the Nobel Peace Prize for fighting against racial inequality.